A highlight of our trip to Paris was dinner at Guy Savoy. Guy Savoy has been named one of the top 50 restaurants in the world by Restaurant Magazine and holds three Michelin stars. And, coincidentally, it was located across the street from our hotel.

Despite some apprehension about dining at a French restaurant, let alone one of the top restaurants in Paris, we did not encounter any of the cliches of French dining–snooty waiters, tiny portions, snails. We were able to be seated and order a glass of champagne for cocktail in French, but then the staff recognized our bewildered expressions and switched to English. Our head waiter, Hubert, helped us select three courses, a kind of Guy Savoy’s greatest hits. Paris has the Eiffel Tower, Hubert said, and Guy Savoy has artichoke soup.

Even while we were still mulling the menu, we were served a few tiny forks of pâté and toast. The champagne we were drinking was phenomenal with strong honey flavors. We have no idea of the champagne vintner, I suspect it exists only in the magical world of Paris dining. After the pâté, we were served a small glass of mushroom soup and a mushroom tasty bit. The bread cart stopped by and gave us a selection of baked goods to try, along with recommendations for which butter, salted and unsalted, to use with each bread. Our first course was sea bass with mushroom and ribs of swiss chard in a sauce with sweet spices and vanilla, garnished with fried seaweed. 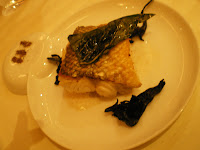 The bass was perfectly cooked with crispy skin (with scales!), overall a mild dish that rested well in the spices with cooling mint and a bit of pepper. Next came the artichoke, black truffle and parmesan soup–a Guy Savoy signature dish. The soup is served with a black truffle brioche roll with truffle butter. The waiter suggested we dip the brioche into the soup–no fussiness here! The soup was sublime. I’m not sure what makes a bowl of green liquid taste so perfect, so scrumptious, but this soup was a joy to eat. The funkiness of artichoke and black truffle are tamed and perfected here, and the truffle brioche was delish. (I’m going to suggest Sister Schubert consider moving into truffles.) 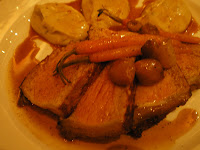 Our main course was a roasted veal chop carved table side–very young! Hubert said–served with pureed potatoes with black truffle, veal stock, button mushrooms and tiny carrots. This dish felt more French Provencal than haute cuisine. Immensely satisfying, this veal was as Bill says, “a delicious hunk of meat,” a lovely pink all the way through. The portions were generous, and the waiter brought more potatoes and sauce mid-course.

I may get the progression a bit muddled here, but I can you that between the veal and our ordered dessert we enjoyed an Earl Grey sorbet, a visit from the cheese cart, two ice cream lollies, and a slice of hazelnut and chocolate cake. Thankfully our desserts were both citrusy and refreshing. I had a grapefruit terrine with Earl Grey sauce (they really like to sneak in 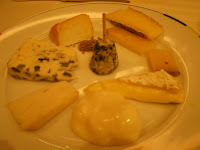 Then, Hubert came by with the dessert cart with a selection of mousse, sorbets and rice pudding with various topping such as spiced plums in wine and chocolate biscuits. Around this time we ordered espressos, which came with a few more chocolate bits. And with the bill, a sliver of apple pie. We definitely did not leave hungry. 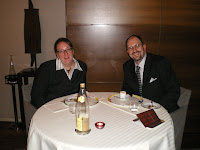 The food at Guy Savoy was wonderful, but Guy Savoy’s staff largely contributed to our memorable meal. Our wine choice was tasted and decanted by the wine steward before we were served. Our water glasses and bread plates were kept full. We were attended to but not menaced. Guy was very present in the dining room. Everyone seemed to be having a pretty good time, and it was fun to watch the staff at work as the restaurant got busier. Hubert took our picture at the end of the meal, “We don’t say ‘Cheese,’ he said, ‘We say ‘Charcuterie!’”