Valentine’s Day in the City of Romance 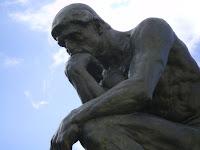 Our first stop on Valentine’s Day was the Rodin museum. Nothing is more romantic than a large, naked man pondering the very meaning of life. In reality, The Thinker represents Dante as he ponders the fate of all characters in their various levels of hell. Even The Kiss, which seems appropriate for Valentine’s, is a statue of an adulterous couple from the series inspired by Dante whose kiss condemns them to the inferno. 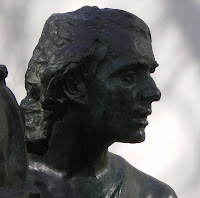 Saturday’s crisp, sunny morning was perfect for exploring Rodin’s sculpture garden. We were particularly impressed by the faces on the Burghers of Calais. I liked seeing some of the studies for the Victor Hugo sculpture as well.

After Rodin, we walked to the Latin Quarter and found a recommended Vietnamese restaurant for some Pho and Bun 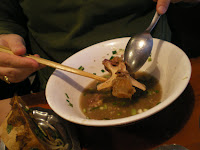 After lunch we stopped by Notre Dame. The cathedral is the setting for a romantic story about a hunchback and a gypsy girl named Esmeralda, although that story doesn’t end well. It’s a 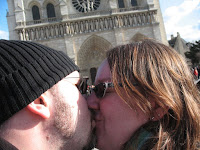 beautiful cathedral. We didn’t stay long though. We wanted to check out the Louvre on our 2-day museum pass.

The Louvre’s reputation as a must-see sometimes competes with its tendency to be overcrowded and overwhelming. The crowds were small in February, but the museum was indeed overwhelming. After wandering around aimlessly for a bit, we decided to take the easy way out and head straight for Mona. 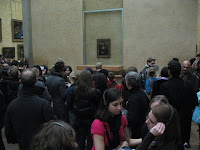 The Mona Lisa is actually quite lovely, and has captured people’s imagination for generations. That’s pretty romantic! We also stopped by to see the Venus de Milo. She’s looking a little rough, but at almost 2,000 years old she still has many admirers. She is the goddess of love, after all. Romantic.

Saturday evening we visited the Eiffel Tower. The tower is a popular Valentine’s Day destination. We arrived around 7:30 and waited a little more than an hour in the chilly weather for our tickets. I told Bill I was a bit suspicious–Eiffel Tower on Valentine’s day. I thought he might 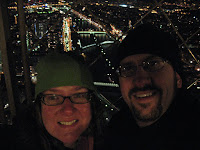 propose! (Turns out a woman from my office did get engaged at the tower that night.) We were on the first platform around 20 minutes and then ascended to the top. The view was great, but the wind on the open platform was fierce! Luckily there is an enclosed portion as well. Here we are atop the tower. Happy Valentine’s Day!