Chris’ Visit in Pictures What We Don’t Miss

And Then There Were Five

My cousin David and his wife Ramona arrived in Dublin Sunday morning. After a little R&R at their B&B, we picked them up, squeezed into the mighty Polo, and headed for Trim Castle. We had collected some picnic items and after the three visitors toured the castle, we had some sandwiches, crisps and biscuits. There was an ice cream truck handy, so Bill and I got 99s. 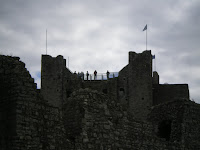 Chris atop the Keep at Trim Castle.

After Trim we drove to the Hill of Tara, an ancient site in Irish history and mythology. The visitor center was closed when we arrived, but the grounds were still open and we wandered up and 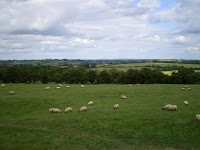 down the curious hills and circles, which are now quite popular with sheep.

We expected David and Ramona to pass out at any moment, but they were going strong. We came back to our apartment and walked to the Watermill for dinner.

Monday our visitors toured Guinness and met up for dinner at our apartment for lamb burgers. T 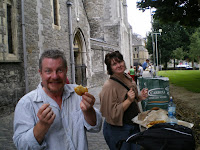 hanks, Bill! Tuesday they took a bus tour of the East Coast which included a tour of Malahide Castle. Tuesday night we met in town for dinner at our favorite chipper, Leo Burdock’s. Bill and I went through a phase where we thought the Leo Burdock’s on Abbey is as good as the one near Christchurch, but we’ve repented. Sure, the Abbey location has seating and plates and is more convenient, but after several visits where we were not amazed by the fish, we decided to 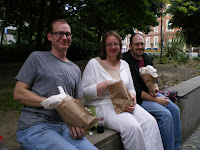 head back to the original. Tuesday night we got the paper bag full of piping hot fish and chips, doused in vinegar and salt, and it was amazing. As my boss said, it’s Proper Fish. We walked around Christchurch, pinching off pieces as we went, and found a seat on a low wall. After our feast we stopped by a pub for a pint.

Chris headed back to Arkansas Wednesday morning. [Chris introduced himself at church on Sunday, and got quite the happy reaction when he said he was from Ark.] Chris, we had a blast while you were here!

I’m hoping we might get some blog recollections and ruminations from Chris and D&R, but I can tell you David and Ramona had lovely weather Wednesday for their visit to Dalkey. Wednesday night they moved into the Gunter B&B. However, I didn’t even see them Thursday–they left for their tour to the Cliffs of Moher before I woke and returned after I went to bed. The cliffs performed in all their splendor and they had a great day. Friday, they did their final shopping in city centre. We met for dinner at Wagamama. We were so glad to be a part of David and Ramona’s 20th Anniversary trip!

We shuttled our guests to the airport Saturday morning, and then there were two.