Indy-Texans in Dublin Down Kerbey Lane 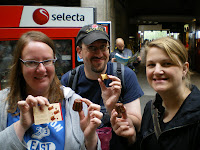 Our journey to France started early Sunday morning. Our fears about sleeping through alarms were for naught, as the taxi kindly started calling at 4:15AM. He was a wee bit early. Bill arranged for him to return at 5:15. The Dublin airport is madness at 6AM on Sunday morning, but most of the hubbub was for flights other than ours, and we easily checked in and passed security for our 7:05 departure. We flew to Ryanair’s Parisian outpost, Beauvais, and boarded a bus for the hour ride to Paris. After spotting the Tour Eiffel popping above the skyline, and driving along some wide, leafy streets, we were dropped off at the Metro, which we took to the train station, and waited for our TGV to Tours. We ate tasty sandwiches and some little fried mini-churro type things, and drank Orangina.

After speeding through the French countryside, we disembarked and boarded a little, creaky train into the center of Tours, the coeur de ville. We got a taxi to our hotel, the lovely Chateau de Beaulieu. We were shown to our chambres, and given keys attached to tassels that belonged on the ceremonial dressage harness of the mightiest steed in history. Large tassels, is what I’m saying. We had been traveling almost 12 hours by this time, so I opted for a three-hour nap. After I awoke Bill and I wandered the grounds for a bit. We had reservations for dinner for 7:45 at the hotel. Dinner, of course, is a story unto itself.