In the shops of Dublin right now you’ll find plenty of kale. In a few weeks you may not be so lucky. Kale availability surges in October for the Halloween tradition of eating colcannon.

But there’s more to kale than colcannon. Loads more. 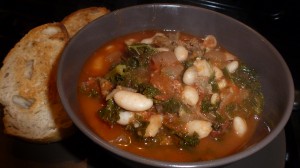 The first thing that comes to my mind when I think of kale is stew. Kale and its cabbagey cousins hold up well in soups and stews. 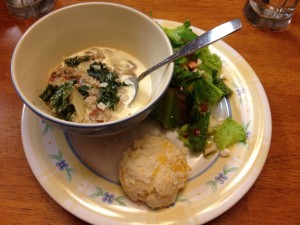 Bill made the white bean stew the other day and I tweeted about it and our friend Lisa replied.

@slgunter love kale and white beans. and kale and most things, really.

Lisa happens to be a food blogger and I asked her for some kale suggestions:

Bill and I have been curious about eating kale in a salad for a while. Kale can be tough, so before serving it raw, the leaves are massaged with the dressing for the salad. Bill says it’s like pre-chewing. I prefer to think of it more like wagu beef massage.

We ate the salad with some Asian-glazed salmon. Delicious. Bill declared the kale salad to be one of the best things he’s eaten in a long time.

I was having a kale chat with a co-worker, and she said she would be interested in kale recipes…if she could substitute spinach. Funny one Fi! But in truth, most kale recipes probably would be great with mature spinach. And thinking about spinach recipes might be a good way to come up with dishes that could handle a bit of Kale. Caryna of Caryna’s cakes told me about making a quiche with Kale, Chard and Emmental cheese. A hit at the Dublin Co-op where she caters the Thursday cafe. And Aoife of I Can Has Cook declares kale to be one of her favorite brassicas in this post about Kale and Anchovy pasta.

In our kale fever, Bill and I decided to try something we’d read about–kale chips. Bill washed and spun dry a bag of kale, tossed with some olive oil and placed the leaves flat on some baking sheets. After 15 minutes in the oven, the much smaller kale leaves were tossed with salt, lime zest and chile powder. The entire bowl of this weird, but addictive snack was then consumed by Bill and me.

Obsessing on kale recently, I’ve been like an FBI agent who scans the air waves, listening for chatter about X Factor or what have you. I jumped when I saw the following on Twitter.

Love it when a dinner plan comes together – kale pesto is served http://t.co/cqxYQSp7

That’s a kale lover I thought, and I asked her if she had any more Kale recipes. Indeed she did: Lentil and Kale stew with smoked fish.

I sent a call for kale recipes out into the twitterverse, and uncovered a recipe for kale and scallops:

@slgunter I used this recipe but kept the kale a bit crunchy! http://t.co/2E5vhKwA

Also on Twitter had a conversation with Mark about cooking kale and he told me his parents used to hide money in kale. Is that a tradition, I asked?

Money in the colcannon? Mark’s comment led us to survey those who sit near us in work. 35% of respondents observed this Halloween tradition as children. Our study also identified a high correlation between finding money in kale as a child and loving kale as an adult. Something to keep in mind, parents! We also discovered a vein of kale revulsion running through the public. To those haters I can only say, this post is for you. And read Daily Spud’s post about rediscovering kale in colcannon.

Yep, ain’t nothing wrong with colcannon. 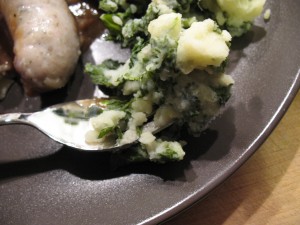 I hope you’ve enjoyed our Kale round up, and now have a place to come when in this situation:

@slgunter I bought kale on Saturday. Yet to decide what to do with it. Any suggestions?

10 Responses to A Kale Recipe Roundup