Frito Pie, followed by a Fit of Genius Cake Kismet

I loved field trips in school. The excitement of it all–boarding the bus, riding into Houston to visit the zoo or the Natural Science Museum (they had shrunken heads!). Having money for snacks and souvenirs. Extra opportunities to be with my friends and study the behavior of boys in a new environment. In his hometown of Huntsville, Alabama, Bill took many field trips to the NASA Space Center, which was great because he loved the huge rocket, the lunar landing video game (before there were video game arcades), and the freeze dried ice cream.

Now we are grown up and we take field trips to restaurants and bakeries. In Drogheda. And we love it. 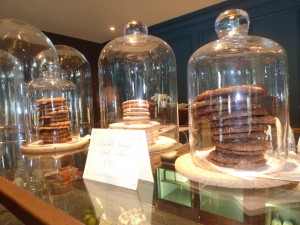 Last Saturday, we joined a crew of food bloggers to meet Jeni and Reuven, owners of Eastern Seaboard  to learn about their successful restaurant as well as their two new ventures, The Brown Hound Bakery and Mo’s To Go.

We assembled at the Brown Hound where Jeni and Reuven invited us into their delightful bakery.  Jeni and Reuven worked with New York baker Craig Thompson to develop the recipes and train the staff at Brown Hound.  Many of the offerings are inspired by Thompson’s grandmother’s recipes, and I have to say, Thompson must have the most elegant grandmother ever.

I can’t imagine entering the Brown Hound without expressing a few Wows. A mix of art gallery and Victorian parlor, the interior positively gleams with glass and chrome illuminating piles of scones,  towers of cookies, and cakes and pies topped with exquisite meringue and icing.  The cool metals are warmed by painted cake stands and platters and the most comforting of all sights–baskets of beautiful bread. Surfaces not covered by enticing edibles feature glassware by artist John Derian, or bottles of olive oil (which are art in themselves). 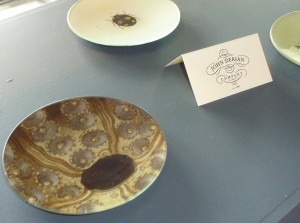 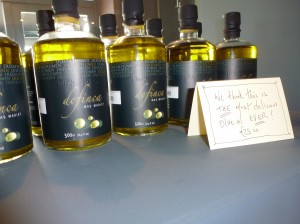 Jeni and Reuven were so kind to gift us each with a box of bakery samples, tied with a Brown Hound ribbon. I’ve heard that these treats did not last long for anyone. There’s a particular buzz about the chocolate banana bread and I have to join in that chorus. It’s moist, perfectly sweet, with huge chunks of delicious chocolate. We also bought a brown butter cake with lemon curd–beautiful to gaze upon, great texture, nicely tart lemon curd. I like that many of the cakes come in several sizes, including cupcake. We picked up a bottle of that gorgeous olive oil as well. 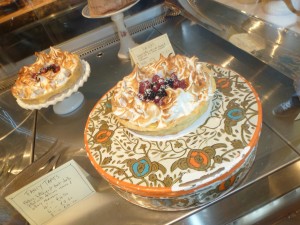 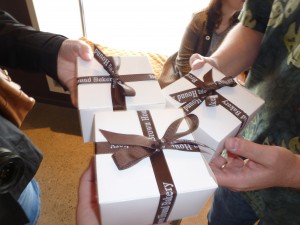 Next door to Brown Hound is Mo’s To Go, a takeaway featuring some choices from Eastern Seaboard as well as an item of extreme interest to the Americans in the group–corndogs. Along with hush puppies and fried whitebait, sides of cold spicy noodles and tabbouleh, this is not your average chipper. Jeni told me that Mo’s is named after her mom, who supports her and Reuven in so many ways, including frequently leaving food for them to find when they get home. The idea of food as gift is embodied throughout all three of Reuven and Jeni’s eateries, through attention to ingredients, preparation and presentation.

After gawking over Brown Hound and Mo’s, we settled down for the best part of the evening–dinner. Eastern Seaboard has been open in Drogheda for a few years and has developed a loyal following. I mentioned to a Laytown friend that I was meeting some foodies in Drogheda for dinner. “Oh, are you going to Eastern Seaboard?” he guessed,  “You’ll love it.” Our seating was a 6:00 and the restaurant was already busy. Our end of the table decided to order several starters to share. An extremely good idea as we got to taste tons of things, including perfect calamari, a luscious pig’s cheek terrine with celeriac slaw, crab cakes, garlicky crab claws, and a butcher’s board featuring pork rillettes and an amazing black pudding, chorizo and pistachio ballotine.

For mains I had the sea bream special with lemon salt and pea shoots. I chose Asian slaw and sweet potato wedges for sides. The fish was delish, especially the skin, and my sides were two great tastes that taste great together. The vinegary sesame flavor of the slaw was particularly refreshing. Bill’s rabbit was outstanding, tender and luscious with sides of perfect spinach and balsamic-laced lentils. The rabbit loin was char-grilled and topped with a smoked bacon and rabbit “ragù.” The smokiness from both the grilling and bacon perfectly complemented the tender rabbit.

For dessert a I had the coffee jelly with ice cream, on recommendation from Clare of An American in Ireland. Clare grew up eating coffee jelly (aka jello) in Japan and was thrilled when she found that Reuven, also Japanese, had included it on Eastern Seaboard’s menu. I absolutely loved this light, flavorful dessert, and am a bit obsessed with it at the mo. Bill’s Little Pots of Warm Chocolate Heaven were exactly what it says on the tin, and included chocolate pop rocks, if you can believe it. 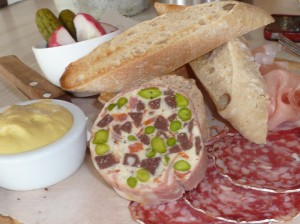 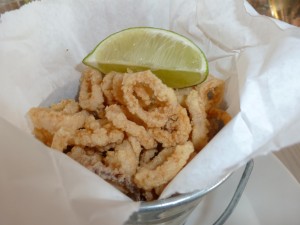 Reuven told us they opened Eastern Seaboard to provide a casual dining option. “Casual Dining” has a black mark in the US for its association with the proliferation of chain restaurants, but the idea that dinner should not require high heels or a bank loan is a good one, and welcome in Ireland. I love the food first attitude at Eastern Seaboard.  But don’t think they don’t let the atmosphere suffer! (I swear their smoking lounge is going to encourage more people to start smoking. You have to see it.) It’s so obvious that these guys care, and I’m thrilled to have spent an evening in their world.

Many thanks to Clare for organizing, and to all the other food bloggers for your stellar company:

It is truly fun to dine with the food obsessed! 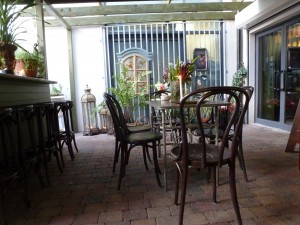 Um, Can I bum a cig? Don’t want to leave this smoking lounge!