POTD: in the green A Tale of Two Pop Ups

Spice up a classic: Mole Brownies

I remember once being overcome by the desire for brownies while innocently watching TV. I proclaimed my desire aloud: Gee, a brownie sure would be good right about now. Moments later Bill was banging around in the kitchen, pulling out chocolate and flour. He had to drive to the store for more sugar. But we were soon munching brownies in front of the TV. Such is the power of the brownie.

There are two types of brownie people: those who like their brownies cakey, and those who prefer them fudgey. We like fudgey.

Several years ago Bill tried the Best Brownies recipe from The Fannie Farmer Cookbook and we agreed they deserved that title. Bill credits two aspects of this recipe for consistently producing excellent, fudgey brownies:

We’re fans of Mexican flavors, so Bill likes to spice up his brownies with chile and cinnamon. He calls them Mole Brownies, after the amazing Mexican Mole sauce that includes chocolate and chiles among its twenty or so ingredients. He uses chile powder made from only ancho chiles, which is hard if not impossible to find in Ireland. Most chile powder is a mix of chiles and other seasoning that would be too savory in brownies. Adding two teaspoons of ancho powder to these brownies adds a fruity aspect with a lovely, mild afterburn. Mexican chocolate typically includes cinnamon, and we’re cinnamon nuts anyway, so Bill adds a quarter teaspoon.

The final alteration is to replace the walnuts with toasted pecans. Walnuts are great, but we’re Southerners and have a thing for pecans. The pecans in these brownies were part of our Christmas package from Bill’s mom in Alabama. 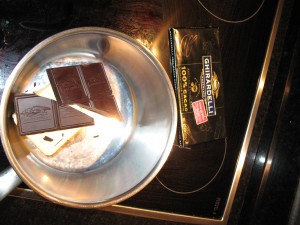 Baking with chocolate is an adjustment in Ireland. Most of our baking recipes call for unsweetened chocolate which is not common here. I just checked Darina Allen’s brownie recipe in Forgotten Skills; it calls for 275 grams of chocolate. Just chocolate. So I guess you pick the type of chocolate according to taste and play with the sugar proportion? Tell me how it’s done, Irish bakers! Chocolate in these brownies is six ounces (170 grams) of Ghirardelli unsweetened chocolate. An American chocolate the Irish can tolerate!

We’d never had a fan oven before moving to Ireland, and it’s been interesting learning how to bake with it. We learned pretty early that it is fabulous for warming up frozen pizza. But for this batch of brownies, Bill decided to leave the fan off and use bottom up heating. Twenty-five minutes at 190°C/375°F produces brownies that still look a bit wet on top, but are ready to come out.

And so, here they are, The Best Mole Brownies. They turned out beautiful with great marbling on top and edges that are chewy but not hard. Very chocolately. The chile powder and cinnamon affect the aroma, providing a great mini-breath of anticipation before you taste the chocolate. Then a little burn after. Love them! 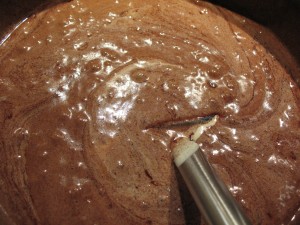 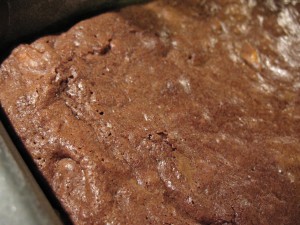 Note: You can search for the recipe within the Fannie Farmer Cookbook at Amazon.com. The Best Brownie recipe is on page 628.

5 Responses to Spice up a classic: Mole Brownies