Burgers in the USA 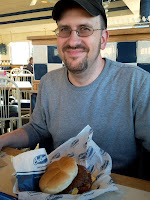 Last year Bill and I were at a festival with food stalls featuring cuisines from “around the world”–Lebanese, Indian, Chinese. We searched in vain for the American food stall, and then wondered what it would serve. Burgers and hot dogs? Pizza? Thanksgiving dinner? High fructose corn syrup with a splash of polysorbate 80? With all of its regional diversity, it’s amazing that the US has any central cuisine, but I think (without doing any research, going with my gut here) that all ‘Mericans can embrace the hamburger. And I have to confess, we have a hard time scratching the burger itch in Ireland.

First of all, the US has number of fast food chains that will serve you a decent burger–Whataburger, Culver’s, and even Wendy’s, with Sonic and Dairy Queen also in the running. So, as is fitting an American returning to mother soil, our first meal was burgers at Culver’s. Culver’s sells “butter burgers” which in addition to being fun to say and sounding naughtily decadent, just means they butter their buns (that still sounds naughtily decadent). I worked within walking distance of a Culver’s for a few years and found their burgers to be consistently fresh-tasting. Their patties are thinner than some, but that allows them to form a nice crust. You can always get double patties. As a matter of fact, Bill is happily about to dig into a double with bacon in the photo above. 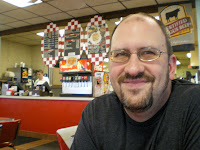 Last night Bill and I ate at Dan’s hamburgers on Lamar. I remember the first time I ate at Dan’s. I think it was in 2002, and at that first bite I thought to myself, this is my favorite hamburger. Not unlike the first time I laid eyes on Bill Gunter. I was changed forever. Now, I appreciate the burger in all its forms and enjoy slathering on guacamole, blue cheese, green chiles or a fried egg, but all that hi-fallutin nouveau fusion falls away with one bite of a Dan’s bliss burger. 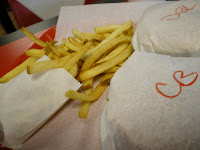 It is the burger in its purest form. Hot, juicy patty. Cheese that tastes like cheese (whether or not it is cheese is immaterial). Crispy, taste-bomb bacon that makes the notion of putting a limp rasher on a burger seem ludicrous. Crispy lettuce and onion. And in our case spicy jalapenos. Dan’s has remodeled since our last visit. The diner-style booths and tables look great and are perfectly non-ironic, since Dan’s been at this for a long time. Bill and I love that every time we’re at Dan’s we see folks that look like they’ve been coming for years–in a good way! I confess we haven’t visited Fran’s, but I can’t imagine it being any better. I fell in love with that burger again at first bite. It left me wanting more, but not sure if I could take it. Thanks Dan!

3 Responses to Burgers in the USA