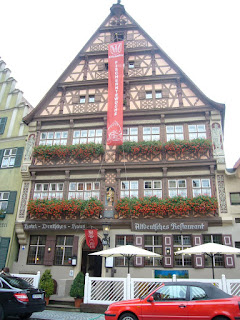 We arrived in Dinkelsbühl right after dark (November 9) and ate dinner at our hotel. The Deutsches Haus is a family-owned hotel built as a residence in the 15th century. The hotel’s richly decorated half-timbered facade exemplifies late Renaissance architecture in Southern Germany.

The interior is full of dark wood and richly painted murals of crests and ribbons and woodland creatures. The restaurant has wooden chandeliers carved with jolly figures gathered around a table, hoisting a pint. 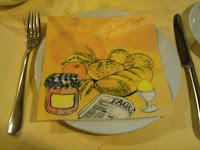 At breakfast, we had cute napkins. 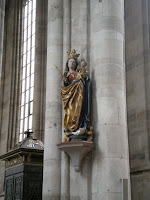 Across the cobbled street from the hotel is St. George’s Church. St. George and his skewered dragon are frequently spotted around Europe as he was widely celebrated as a Christian Martyr and is the patron saint of many countries including England, Greece, Ethiopia and Palestine. Dinkelsbühl’s church represents construction spanning the 12th-16th centuries. Decoration in the church, including the flower arrangements, incorporates stalks of wheat, as Dinkelsbühl means “wheat hill.” 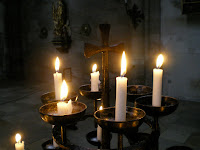 The church was dim and cold when we visited, making the soaring baroque ceiling, imposing pipe organ, intricate tabernacle and carved wooden pews a bit dulled and wintry.

We found an inscription on the exterior of the church dated 1492, reminding us of how many structures were already in place when Columbus sailed the ocean blue. The US is such a young country. [Similar to a conversation I had recently with a young woman about The New Yorker, and I realized I've had a subscription to that magazine longer than she's been alive.] 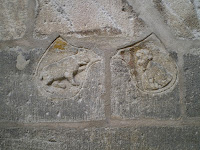 I don’t know what these carvings represent, but I like them.