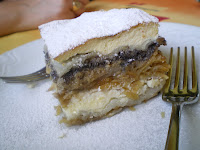 On Friday after breakfast at Skerlj we chatted with a couple from Wales. Like many visitors to Slovenia, they were heading to the Alps for some hiking and camping. We talked about various places to visit in the area, one of which was nearby caves. Bill and I decided that a cave visit would be our activity for the day, so after a snack of leftover pizza we hit the road for Divača. Unlike Idrija, Divača really was only 30 minutes away. We stopped for lunch at Gostilna Malovec. Bill had some gnocchi and a salad, I had some spinach pastry, and for dessert we had a regional specialty–pastry layered with nuts and cottage cheese called gibanica. Wonderful.

We arrived at Škocjanske jame, the Škocjan caves, in time for the 3:00 tour. Even though the Škocjanske jame tour takes about an hour, we saw only a few of the cave’s chambers. The size of the cave system, its excellent examples of karst topography resulting from dissolved limestone, and the cave’s beauty have earned Škocjanske jame distinction as a UNESCO World Heritage Site. We enjoyed our visit underground in the cool, moist, otherworldly surroundings (where no pictures were allowed). We descended a couple hundred meters and then had to climb our way back up many steps. The tour ends at the opening of the cave where the Reka-Velka river begins its underground path. The river valley and surrounding mountains are breathtaking. 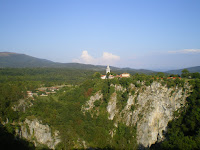 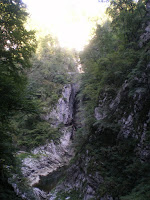 Friday night as we went to dinner, the courtyard was full of people, and a brass band was unpacking its instruments. We learned that Skerlj was hosting a 70th birthday. The party was taking place inside, but as we dined in the courtyard we were able to enjoy the festive music.

Unfortunately I fell ill during the night, and spent all of Saturday in our room. Bill made a few forays out–to bring me chamomile tea and bread, to drive to the next town to find some lunch and buy me bananas, to walk through the village, and to eat another amazing dinner at Skerlj.

By Sunday I was thankfully upright again, and we left mid-morning for our drive to Marco Polo

airport outside Venice. We stopped to visit Štanjel, a walled village perched on the side of a mountain that we had sped past during our driving fest the day before. We sat in the garden by the Villa Ferrari and gazed out at the spectacular scenery. We watched a hawk gliding on the air currents. For minutes at a time he appeared motionless before suddenly diving straight down into the valley. After lunch we continued our drive back into Italy.

Our flight wasn’t until 9PM, so we still had several hours to fill. After crossing into Italy we picked a random exit and drove into the walled town of Palmanova. 16th century Palmanova was an innovative fortress town, built in the shape of a nine-pointed star. We wandered around the 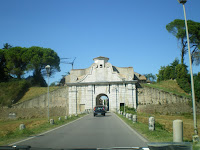 square for a while, stopped into an “internet cafe”–actually a restaurant with a computer in the corner (which the hostess had to convince some kids to relinquish)–and enjoyed some kind of alcoholic lemon ice.

Then it was back on the road to Marco Polo. Hopefully the airport is not as close to Venice as we’ll ever get.