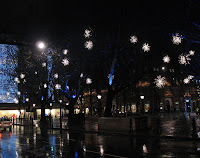 A few months ago we were offered use of a flat that our friend’s mom keeps in London, as you do. She only visits the city during the week, and our friend stays there some when traveling for business, but it is rarely occupied on the weekend, and is most likely, lonely. So, we leaped at this generous offer and booked flights to London for the weekend of December 12. When the US trip materialized, we decided to keep the London trip on the books. We can do it! We are jet setters!

After our first visit to London, we decided to set a theme for future trips to help narrow the multitude of choices. The organizing principle this time was easy: Christmas. We wanted to walk through the mirthful throng, gaze at dazzling Christmas lights, sing carols and sip mulled wine. Perhaps a recently unembittered old man would toss a few coins out a window and direct us to purchase a large, Christmas goose.

We arrived at the flat around midnight after a delayed flight into Heathrow. Around noon on Saturday, we walked a few blocks to the Coopers Arms Pub for lunch–I had a tasty steak sandwich and Bill noshed on wild boar sausages and mash. After laying in some breakfast supplies for Sunday, we headed to the Geffrye Museum for an exhibit on the History of Christmas in the English Home and a talk on the history of the Christmas card. The Christmas card is one of the few uniquely English contributions to current Christmas traditions, started by an English businessman who printed cards in the early 1840s to send to family and business contacts. The first card contained scenes of family celebrations and tending to the poor, but it took awhile for the classic 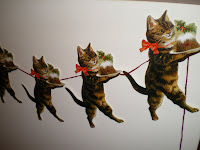 scenes to be established. Some of the early cards look pretty wacky–red imps pulling a sled and a goose wearing a dress and bonnet. Speaking of wacky, I bought some garland with a cat carrying a Christmas pudding.

After the Geffrye, we set out in search of Christmas lights. This portion of the evening can be imagined as a Monkeesesque montage of us riding the underground, walking a few blocks, looking at some non-impressive lights (Trafalgar Square–one dimly lit tree, Covent Garden–space ship lights?), jumping back on the subway, walking about a mile to switch trains, emerging again to stare blankly at disappointing lights, until we reached Bond Street, which was a bit incongruently, but at least festively lit. All of this in the rain of course. We did linger in Trafalgar Square with carolers who were raising money for Epilepsy, but were unfortunately not particularly great singers. We joined in for a while, but turns out we don’t know a lot of English carols. We decided to move on. Once we had strolled along Bond for a while, we stopped in a fast food noodle sushi shop for dinner. Not bad.

Turns out my favorite lights were in Sloane Square (pictured), right at our subway stop. We stopped back by the Coopers for a little libation before calling it a night.

Sunday we visited retail mecca at Harrod’s. Harrod’s is a spectacular store and we just wandered 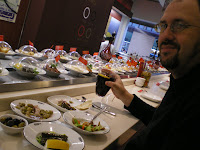 around for awhile, trying not to choke on perfume or get trampled by other gawkers. We wanted to see Santa’s grotto, but discovered that you can’t get in without a ticket and a toddler, so we visited the toy floor and Christmas decor department. Christmas crackers were 50% off, and were were tempted to pick up a set originally marked at £500. The prizes included an MP3 player! The food hall in Harrod’s is full of tantalizing cuisine. Next time we’ll stop by Harrod’s and have an amazing picnic.

For lunch we visited a Harrod’s annex across the street which was nice and quiet and featured a fun Lebanese tapas counter. 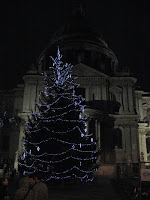 After Harrod’s we went back underground to the Thames to a Christmas Market where we found another piece of the Christmas puzzle–mulled wine. Bill enjoyed a pork sandwich while we browsed the crafts. Then we walked across the bridge to St. Paul’s, which featured a pretty tree. And then it was time to gather our bags at the flat and hop the subway back to Heathrow.