Lunch in Lucca To Florence 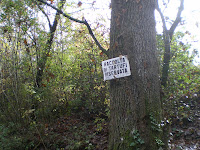 It’s dusk at the Doderi house on Barbialla Nuova farm in Montaione. Mom, Dad, Bill and I have just returned from a trip to a grocery store called Pam to pick up some items for breakfast tomorrow. We’re staying in a self catering apartment on an agri-tourisme farm. It’s a new building, but evokes an old farm house–casa colonica–with brick floors, 12-foot ceilings, and exposed beams. The curved-top doors and windows 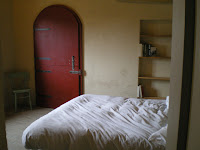 are painted brick red, other woodwork is pale green or blue.

The fog was coming in as we returned from the store. Last night we had to find the farm in the dark as we had tarried too long in Lucca. We twisted through a village knotted to the side of a mountain, passed through two valleys and looked for a white km6 marker which signaled the turn for the farm. We bought a few items from the farm pantry and a €5 case of water. Before dinner we snacked on prosciutto, cheese and grapes we had bought yesterday morning in a market in Pisa. The grapes were huge, green and crunchy, as much tangy as sweet. The cheeses were a mild, creamy Gorgonzola and a hard, tasty cheese of which we never quite learned the name. [But later decided was Pecorino Toscano.]

After navigating us safely through the night, Bill then prepared us dinner of pasta with an olive and tomato sauce and some Chianti. The food and wine were all organic, grown and 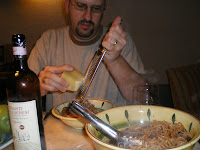 produced in the nearby town of San Gimignano.

The apartment is two bed/two bath, so we’re not roughing it. We all slept well last night, and ate a breakfast of more cheese, pear, apple and bread before setting out on a truffle hunt.

The acres of this farm produce 500g of truffles a week during mid-September to December. This pungent fungus is unearthed by an 80-year old truffler, Imperio, and his two dogs, Toby and Bobby. Toby, the elder dog at 11, has the more sensitive nose, but Bobby is a little more determined to find the truffle. Bobby’s enthusiasm puts him at risk for actually eating the truffle, however. This woolly Lagotto breed is most commonly used for truffle hunting. Puppies are fed bits of truffle. 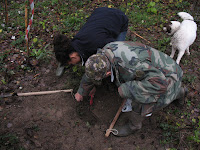 We met Sabali around 9:00 this morning, and set out with Imperio, his dogs, and a fellow agri-tourist couple from Greece. Imperio and Sabali were armed with tools that looked like a small straight hoe [a vanghino]. It’s been rainy in Montaione and the roads and paths were slick with putty colored mud. Sabali said they’d had a dry summer and a wet fall, which was not particularly good for the truffles. We started out along the edge of a field, Imperio leading the way, the dogs weaving out like sniffing tentacles. The field was lined with White Poplars, a tree favored by truffles. The dogs quickly found some dirt of interest, and began digging. We were among several small poplars that had been planted to replace more mature trees that died. Sabali said that it is better to plant very young trees so the truffle fungus can grow along with the roots. The day before the dogs had found some truffles in the field; occasionally the fungus filaments can run many meters from the tree.

Sabali brought us a handful of dirt from the fresh hole, and indeed it had a garlicky musk. Soon Imperio uncovered a small truffle, and Sabali brought it to us. We passed it around and all took a sniff. Oh yeah, that’s truffle. The dogs were not ready to leave the hole, so Sabali and Imperio 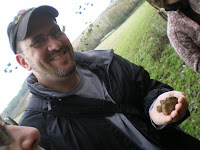 kept exploring the hole, sawing away a piece of root. Under the root they found a larger truffle. This would be the largest find of the day.

We walked through the woods for another hour or so, tromping on wet leaves, Imperio calling to the dogs, “Dove (doh-vay)?” Where? The dogs kept looking; today’s haul was around 75 grams. Imperio has brought in a kilo this month. He told us last year he brought in 7 kg in one month. Still, the 75 g would bring a couple hundred euro. 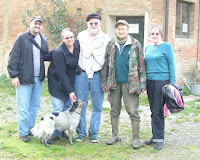 After the hunt, we were refreshed by some red wine, fennel salami, pecorino cheese, olives, and bread. I had recently bought some fennel salami at Carluccio’s in Dublin, and I can say officially we are crazy about finocchiona. We completed our lunch with biscotti and Vin Santo, a sweet wine made from raisins. We decided to buy some of the smaller truffles found today, so Sabali cleaned and weighed them for us. The larger truffles are more expensive by the gram, as they are more desirable to restaurants. We bought 34 grams; several small truffles. Sabali wrapped them in paper and placed them in a glass jar. We’re to replace the paper every day. White truffle is supposed to be amazing with eggs, and we also plan to make some truffle butter. Or maybe we’ll sell it on the streets of London: £60 for 10g. [Bill used the truffles for tagliatelle al tartufo.]

I took a nice hot shower after the hunt and crawled into bed to read, which of course meant I snoozed a bit. Mom and Dad also napped, and Bill read up on the next phase of our journey, 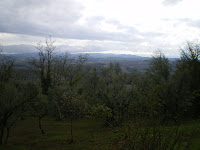 Florence. We snacked a bit throughout the afternoon, and sat outside during an afternoon rain shower. The Doderi house looks out over miles of Tuscan hills, which today were yellow and blue and grey. We’ve had a kitty friend for our stay here, and she visited with us th 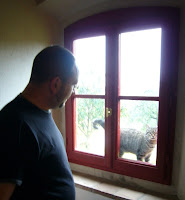 Our trip to the grocery store supplied us with plenty of diet coke, and some eggs and mortadella for breakfast. We’ll head out to one of the recommended restaurants for dinner. Most restaurants start serving at 7:30.

Some scenes from the truffle hunt: