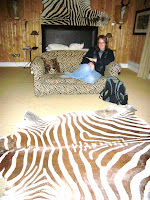 A travelogue by Celia Lamb

Clifden
On Saturday, October 25, The Gunters and Lambs drove from Dublin to the Connemara region of Western Ireland. We went to the only town in the area, Cl 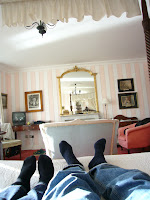 ifden. There we lodged in a beautiful bed and breakfast, The Quay House, which is right on the water. Our rooms were spacious and comfortable. Sharon and Bill’s room was sort of British Colonial with zebra-skin rug on the floor. Charles and my room was more traditional with four poster bed with canopy. After settling in, we went to the city center and had a wonderful dinner at Off The Square restaurant. 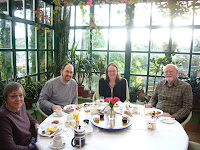 On Sunday, after breakfast which included great home baked brown bread, we went into Clifden to a Connemara pony auction. The horses of Connemara and renowned for their surefootedness. Myth has it that they are descended from horses ridden by ancient Celt invaders. Charles would love to have

purchased a horse but we didn’t think we could get it back to the States very easily.

Sunday afternoon we were invited to have tea and cake with 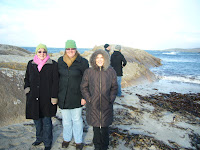 Sharon’s co-worker, Brona, and her husband Conall. They were spending the holiday week-end at her family’s oceanside vacation home in Claddaghduff. It is a beautiful location up on a cliff above the Atlantic Ocean. It was quite cold so we enjoyed the peat fire 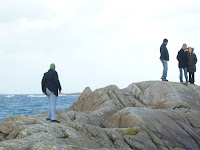 going in the cottage fireplace. We scampered down rocks to a small beach area. In the summer the water is warm enough there for swimming. 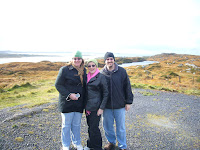 Monday noon we left Clifden and drove to Galway stopping a few times for photo opportunities. Charles and I checked in to the Skeffington Arms and Bill and Sharon drove back to Dublin.

Galway
Tuesday and Wednesday we took all-day coach tours of the area. Tuesday we went to the Cliffs of Moher and the Burren area of County Clare. The terrain is barren and rocky but very beautiful. Boireann, its Gaelic name, 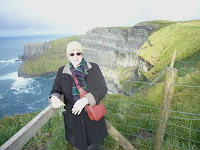 means rocky land. We had lunch in a pub in the tiny town of Doolin. The Burren interior has no settlements today because of its shortage of water. The rivers are drawn underground by the limestone permeability. There is 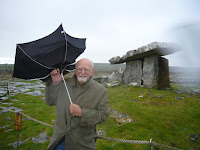 evidence of ancient population. The portal dolmen of Poulnabrone and the nearby wedge tomb of Gleninsheen show with what pomp and ceremony the prehistoric Burren-dwellers buried their chiefs 5000 years ago. When we were at the wedge tomb, a wind came up and we were sleeted on.

Wednesday, our coach tour was to Connemara and although we had been in the region (Clifden) 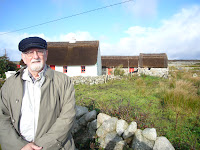 we had very different sights today. This region is harshly beautiful, remote and alluring country. Apparently Irish city-dwellers in search of their roots find confirmation of their Irishness in this wild western half of County Galway. We drove through tiny villages where farmers still make their living on tiny acreages lined with rock walls. Lots of sheep here. Also we saw thatched cottages. 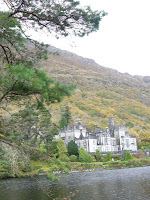 Our tour included the beautiful Klyemore Abbey. The location and the gardens surrounding the abbey are spectacular. Our last stop of the day was in the town of Maam Cross to see the cottage where The Quiet Man starring John Wayne and Maureen O’Hara was filmed. It was cold and sometimes rainy both today and yesterday but the tours were very enjoyable and informative. 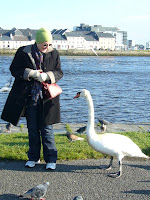 Thursday we walked around in Old Town Galway and visited the swans at Claddagh Quay. We did a little shopping, checked out of the hotel and headed for the train station. Our train ride back to Dublin was quite comfortable. We got back to the Gunters’ and were here to welcome them home when they arrived from work.