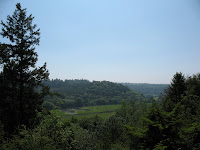 Last Monday, June 2, was a bank holiday and Bill and I spent the long weekend in Avoca in County Wicklow. Every year our church spends the June bank holiday weekend at a retreat center called Ovoca Manor and we were blessed this year to have splendid weather. I managed to get a gen-u-ine sunburn (on my left arm only). The Manor itself is an Edwardian home build in 1909. In the ’30s it was purchased and placed under a trust that required that it always be used for “the spiritual and moral improvement of young people.” After many years as an orphanage, the home was acquired for IR£1 by a Christian organization called Scripture Union. The lovely 21-acre grounds contain additional housing–Bill and I stayed in a hotel-style room with an en-suite 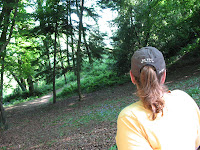 bathroom. Yea!–trails, playgrounds and something called an assault course, which I think is the same as an obstacle course, but I stayed away just in case.

The weekend away was wonderfully laid back. While the kids and teens had a structured curriculum, the adult time was almost completely free form with a few set times for worship and interaction, and evening activities such as a table quiz (third place!) and a talent show (enjoyed purely from the audience). The facility does not provide meals, so we each were involved in meal service for at least one meal. Bill and I worked Sunday lunch, he in the kitchen and I in lunch lady mode. The food was fantastic all weekend. We’re much impressed by K & M’s planning and execution to feed over a hundred folks for three days. We were asked to bring “traybakes” and as expected, the Irish love Texas Gold Bars.

Much of the time was spent gazing at the beautiful surroundings, from either the sunny picnic tables outside the manor, or from the forest trails. As you may know, our church is comprised of three congregations, so we enjoyed meeting folks from the other congregations, as well as some from our own. The church didn’t meet at all in their normal locations on Sunday morning. I won’t say the staff got a break necessarily–many of them were very busy at Ovaca–but giving focus on the body being together in a different way than the typical Sunday service was cool, 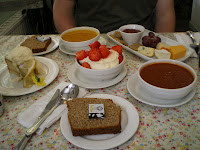 On Monday Bill and I took a scenic path back to Dublin. (Although you’d have to work pretty hard to avoid scenery completely!) We were a few kilometers from Avoca village, the mother ship of the Avoca stores we like so much. We stopped by for some lunch and also to watch the hand weavers at work. 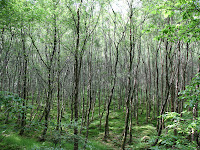 We then drove to Glendalough, the Glen of the Two Lakes. This glacial valley was home to a monastic order founded by St. Kevin in 6th century. A man of hermitic tendencies, he chose a stunning location to retreat from humanity. The area is now a National Park with various levels of trails and camping options. We spent 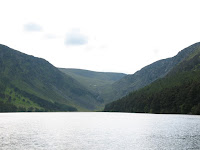 about 2.5 hours walking the easy trails to the second lake and back. 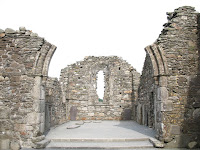 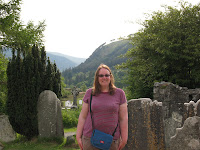 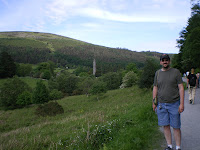 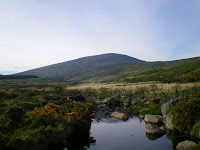 We returned to Dublin through the rocky terrain of the Wicklow Gap. We expected to hit Bank Holiday traffic on the way home, but traffic was fine, as a matter of fact one of our better drives up the M50.