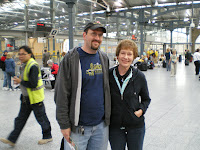 Last Tuesday, Bill, Peggy and I survived this ambitious agenda:

I suppose it’s obvious we were with a tour. Bill and I would never come up with so precise an itinerary. Such tours are great for cramming tons of sights and scenery into one day, with no stress of navigation or parking and an avuncular OAP named Edmound sharing interesting facts peppered with corny jokes. (Did you know the EU has outlawed round bales of hay in favor of box-shaped ones? They were afraid cows were not getting a square meal.) We would have enjoyed about 25% more time at each stop, but that would have pushed the tour out to 17.5 hours rather than the manageable 14. Thanks to our lengthening days, we had daylight for the duration of our trip.

Our first stop, Bunratty Castle, a fortress built in 1425 was restored in 1954 and contains the 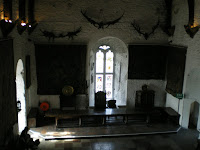 furnishings and household items representative of life in the 15th and 16th centuries. The site was originally a Viking camp, and then a Norman stronghold. Irish Chieftains took possession of the land in the mid 14th Century and the castle was built by the MacNamaras, and then inhabited by the O’Briens, the ruling clan of North Munster. Under Henry VIII’s rule, the O’Briens professed loyalty to the King of England and were granted the title Earls of Thomond, but eventually surrendered the land to Cromwellian troops. The castle grounds were portioned to various plantation families, one of whom lived in the castle until 1804. The castle fell into ruin until restoration began in the 1940s. While I did enjoy some of the decorative elements at Bunratty, it was one of my least favorite castle experiences (acknowledging that lessor castle experiences still make for a fun day). The tour was a bit skimpy, and the castle interior is hard to navigate 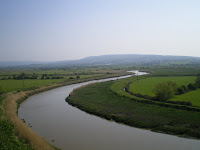 and view. Castle designers should consider future tour access! The view from the top was not too shabby, however.

The castle grounds contain a 19th century replica folk village, and we all three determined we’d rather live in the farmhouse than the dank castle. The folk village contains a street of shops, streams with mills, a church (moved stone by stone from Ardcroney, Co. Tipperary) and the house the plantation family built in the 19th C. 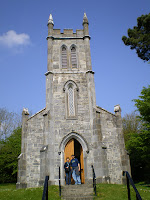 We were very hungry when we reached Doolin for our pub lunch. Peggy really enjoyed her salmon. I had a burger and Bill had Irish bacon and cabbage. At lunch we added a fourth to our group, a North Dakotan on the tour who was visiting Dublin with some friends who sadly had to work that day. We much enjoyed her company, especially on our train ride back to Dublin.

We had spotted the cliffs on our way into Doolin, and I was looking forward to seeing these famous jewels in Ireland’s crown of stunning coastline. I should mention here that the entire week of Peggy’s visit the weather was tremendous, amazing and dazzlingly perfect. The sun was so bright at the cliffs that my little camera could barely take in the beautiful sight. The West Coast of Ireland stands boldly against the vast Atlantic, making the sparkling loveliness of the ocean defer to the cliff’s rugged beauty. I loved watching the white spray of water against the rocky base. 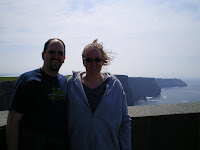 The cliffs are on the edge of a rocky stretch of coastline called the Burren. This barren limestone landscape did not deter the Irish from scratching out an existence, sometimes at the command of landowners. Almost two thousand miles of stone fences cross the area. These walls of rock have no binding or mortar, and have 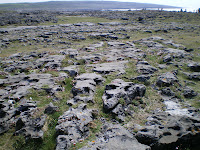 survived decades against the fierce coastal winds. Farmers carted seaweed from the beaches to create soil on their lands, and the resulting grasses support herds of livestock to this day. The Burren area also supports an amazing array of wildflowers, but 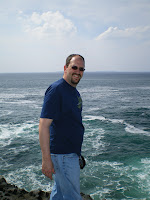 we did not see too many blooming on our visit. We stopped for a photo op and Bill and I ventured to peer over the rocky edge into the turquoise swirl.

At one point the bus of tourists was thrilled to be caught behind cattle on the road!

After rounding the bay to Galway, we had just enough time for dinner. Bill and I handily remembered a bakery we had visited on our last trip to Galway last year with my parents. We boarded the train at 6:00 for another three hours of rumbling past piles of golden whin bushes and spring 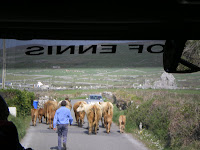 greens even greener that you remember, that touch blue skies which fade into gray and charcoal mountains.