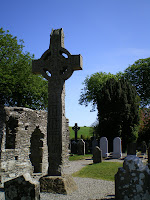 We set out this morning in the mighty Polo, headed for Monasterboice and then destination unknown. This is the third time Bill and I have been to see the Celtic High Crosses and the High tower in County Louth, and I continue to be impressed that we can touch this longlasting evidence of faith history.

After Monasterboice we decided to head to Carlingford. Sound familiar? Yeah, we were there last weekend. We knew it was a good spot to grab some lunch and would not disappoint for lovely surroundings. We landed 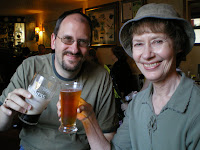 in a pub called O’Hare’s for some welcome tipples and grub. After an ice cream cone and a walk along the water, we drove around the lough and into Northern Ireland. We were in another country! It’s an open border, so open we weren’t even sure we’d crossed until we were in Newry. According to the Irish name of the city, we were at The Yew Tree at the Head of the Strand. We were in NI for 15 minutes, long enough for our phones to text us that we were roaming in the EU. 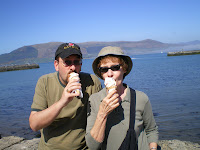