A Day in Dalkey 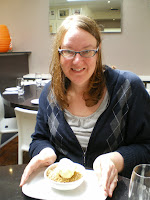 For Peggy’s first day of sightseeing in Ireland, we ventured about 35 minutes away on the DART to Dalkey. All we knew about Dalkey was that it met the basic requirements for a fun day: a castle, coastal views, and places to eat lunch. We started with lunch at a great cafe called Nosh. I had a salad with poppyseed chicken and mango and avocado salsa. It was a tasty departure from the grub I’ve been eating recently. Bill’s tart and Peggy’s tomato cumin soup were nice as well. We went all in and had dessert, or I did at least–a plum crumble with some surprisingly hard core spices like cloves, but the plums stood up to the spice and were delish. 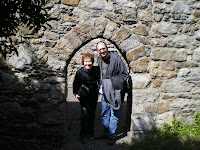 Dalkey’s castle is conveniently located right in the middle of town. Actually a fortified town house, Goat Castle was built in the 1400s to store goods received into Dalkey Sound. Constantly under threat from the dispossessed Irish, the castle boasted all the defensive features we’re starting to recognize as standard for the 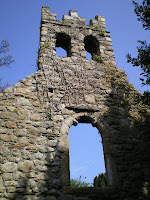 most discriminating Medieval landowner–a murder hole by the kitchen hearth for pouring boiling oil, and a machicolation over the front entrance for dropping stones on the rude and unwelcome visitor. The staircases twist clockwise to give advantage to the right handed swordsmen descending the stairs. The steps themselves are unevenly spaced to trip any invaders who survived the murder hole. The castle grounds also contain the ruins of a 10th century church with a twin belfry. 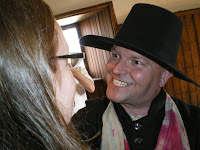 We were fortunate to meet some folks quite familiar with Goat Castle. None of the Cheevers family themselves (Cheevers sounds like chevre which is goat in French, get it?), but an archer and a cooking maid were on hand to describe and illustrate castle life. We also met the barber surgeon, but he was a bit creepy, and we were glad to leave with 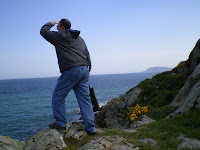 all our teeth, and limbs. And blood.

After our castle tour we headed toward the coast. Our climb up the slow hill completely paid off. 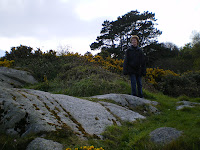 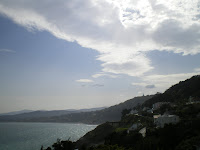 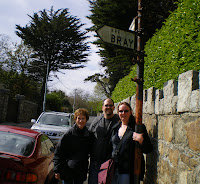