Our life in a box Rainbow of the Day 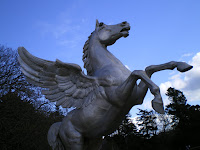 Saturday Bill and I visited Powerscourt in Enniskerry, at the Southernmost reaches of Dublin. Powerscourt is an 18th century Palladian mansion with terraced grounds that include Italian and Japanese gardens, plus lots of lakes, streams, and fountains. Indeed, we overheard one lad piqued by the abundance of water works (and perhaps the lack of a football pitch) to exclaim, “Why is this place bursting with fountains!?” Powerscourt even has its own waterfall, but we didn’t trek far enough to see it. 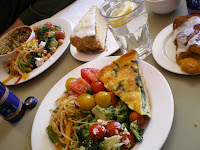 My favorite feature of Powerscourt is its Avoca cafe. (Avoca is perhaps my favorite purveyor of flavors in Dublin.) After an hour on the DART, a 20-minute bus ride, and a 20-minute walk up the drive, we had a scrumptious mini-feast. The dining area was pretty full, but as I stood table-less with my tray, a bus-girl with an east-european accent told me, “If you have food, you can sit down.” So, emboldened, I asked two women if we could share their table. It was a yummy lunch, and Bill’s lemon cake was one of the two best lemon items we’ve had on the Isle. (The other being a caramelized lemon tart at Eden.) 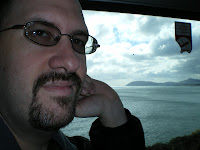 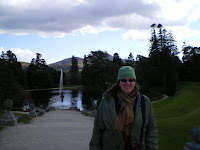 Two winged horses of zinc (1869) stand at the base of the stairs that lead to Triton lake. 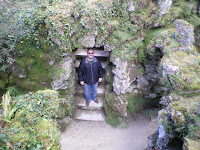 The grotto in the Japanese gardens was built in the 18th century using petrified sphagnum (peat moss) from the banks of the River Dargle.

The gardens were just putting on their springtime blooms. This tree is a cousin to the magnolia with the same luxurious petals and spiraling rows of stamens. (Did you know that the magnolia comes from an ancient family 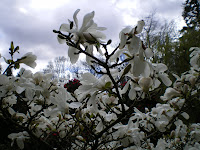 of flowering plants which evolved before bees appeared; the flowers developed to encourage pollination by beetles.) 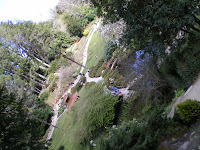 Once we’d arrived at the Powerscourt, we found out there was limited bus service back to Enniskerry, so our trip home included a walk down the steep hill to the town centre. During our 45 minute wait for the bus to the Bray DART station, we watched at least 30 people stop at the Spar for a soft-serve cone with a jaunty Cadbury Flake accessory. And it sleeted for four minutes. 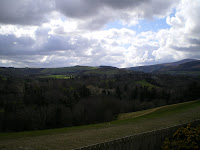