Booking Up All Roads –> Rome 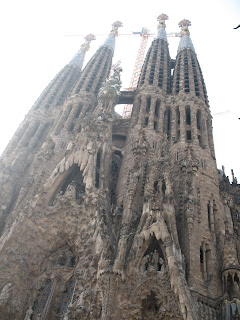 When you first see the Nativity Facade of Gaudí’s Temple de la Sagrada Familia you might wonder, as we did, whether Gaudí is the origin of the word gaudy. Well, he’s not. The term gaudy originated in the 1500s. But Gaudi may be the origin of the term “insane genius,” or at least “extremely ambitious project that may never be completed.”

Construction on the temple started in 1882. When the initial architect left the project after less than a year, Antoni Gaudí i Cornet took over design and construction of this Monumental Expiatory Church, erected to the glory of the Holy Family. Gaudí continued to refine his vision for the 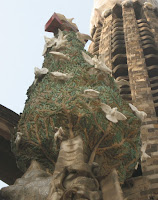 temple until his death by streetcar accident in 1926.

Gaudí saw completion of a good part of the Nativity Facade, a dense, doves. The filigree continues into the cloister where the arches cradle 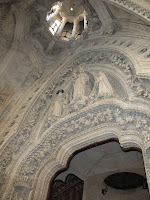 patriarchs, prophets, saints and the Virgin of the Rosary with child. Ornate Gaudí is impressive and interesting, and evidences the effort and expense humans are willing to invest into places of worship. But it is Gaudi’s modern interiors and Passion Facade that made us fans of the unfinished temple. 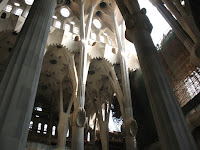 [spiral] Other words you can use to describe Gaudí’s design: hyperbolic, dodecahedron, chiaroscuro. 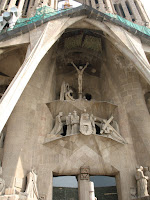 Gaudí’s geometry is as beautiful as it is rooted in calculations. The figures in the Passion Facade are sleek and strong, elementally laid bare. Compared to the Nativity Facade the passion figures are stark and minimal. There are large icicles surrounding the nativity scenes (Christmastime is in winter after all); to me these drooping stalactites make the Nativity Facade look like it is melting, and the Passion Facade is what remains. This stylistic progression is part of what makes you feel 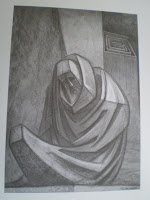 you’re experiencing a genius vision, and the oscillation between the vast breadth and minuscule detail of his designs might make one slightly insane. We loved the Passion Facade, and bought a set of prints of Gaudí’s Passion figure sketches. 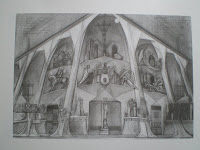 Gaudí’s design even presaged modern skylines with a huge, lighted, mosaic cross at 122 meters (one meter lower than nearby Montjuïc, so as to not exceed God’s creation) and the words “Hosanna Excelsis” emblazoned on each of the twelve bell towers.

The Sagrada Familia is famous for being unfinished. Over a century after construction began, the temple is a little more than halfway complete. The construction has met with several obstacles, including a civil war, but workers were busy 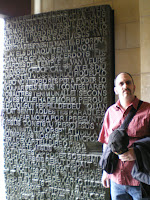 constructing an aboriform column the day of our tour. A museum in the basement of the temple contains Gaudí’s design drawings, models and sample ironworks. Gaudí designed every element from the tubular bells in the bell towers to the iron candelabras. More of a visionary than a project manager, Gaudí would respond to inquiries about the completion date of the temple by saying, “My client is in no hurry.” Bill and I have decided to coin a new PM term as an homage to Gaudí: Whenever we encounter a project that has gone a bit off the rails, no matter how brilliant, we’ll say “This is turning into a Sagrada Familia.” Feel free to use this term for all your scope creep needs.