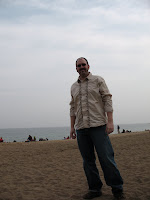 We’ve yet to address all the Barcelona teaser topics we posted. I didn’t expect any votes to learn more about Catalan Independence. I should have remembered about you history buffs out there. I can tell you Catalonia was once part of Spain, and now it is basically not. Bill may post more about this later.

Also, a confession: I am the annoying American that doesn’t speak Spanish. Surprised? Even Bill was making fun of my weak attempts: Qwat-Tro! Of course Bill wasn’t exactly chatting up the Spaniards either. But I did grow up watching Carrascolendas; I could have retained a useful phrase or two. (Further confession: I used to get annoyed with Carrascolendas because I couldn’t understand the Spanish, but these were pre-cable days. You watched PBS or nothing.) But Barcelona is such a lovely city full of such lovely food, I regretted that I couldn’t communicate more respectfully with its inhabitants.

The Picasso Museum in Barcelona focuses on Pablo Ruiz Picasso’s formative years, leading up to the cubist works that have come to represent him. Picasso’s family moved to Barcelona when he was a teenager. He studied there for a few years before moving to Madrid. Picasso continued to return to Barcelona, to visit family and occasionally work in studios there. We saw a special exhibit of paintings that Picasso had collected. Many of the paintings were by contemporaries–Renoir, Cézanne, Rousseau, Matisse, Degas–and were acquired from trades with other artists, agents and gallery owners. Picasso kept many of these canvasses stacked around his studio, amid his own work and his collection of carved African figures. I especially 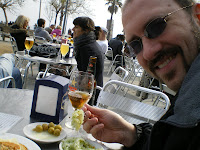 enjoyed his Las Meninas series, as well as seeing his artistic progression and forays into sculpture and ceramics.

We spent our last day in Spain at Barceloneta, a beach on the Mediterranean coast. We love the pace of beach life and enjoyed an afternoon of wandering along the boardwalk and eating cheese sandwiches, olives and bacalao (salt cod) on one of the many restaurant patios. (Bill is a slightly larger bacalao fan than I am.) 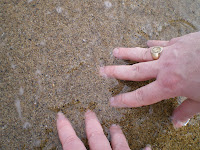 We touched the Mediterranean. 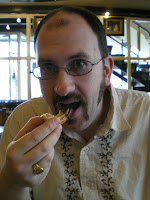 I’ll leave our tales of Barcelona with the dish that completes many Barcelona evenings–churros con chocolate. We found ourselves on our last day having not yet indulged in this chocolatey goodness, so we vowed to stop at the first joint with a Churros con Chocolate sign in the window. It happened to be around 5:00 in a cafe near the beach. The few occupied tables appeared to be finishing up lunch, and in one instance, a bottle of whiskey. A woman brought us two mugs of think, hot, rich chocolate, almost a pudding. The churros had a slight crunch, and were of course, deadly dipped in the chocolate. 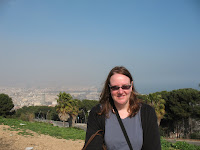 Coda: I’ll post a pic of me since this post is a bit Bill-centric. This is atop Montjuïc.