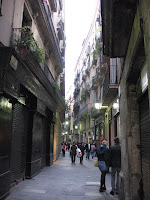 Barcelona is a place for wandering. The Gothic Quarter (El Barri Gòtic) is a net of streets, strung with shops and sidewalk cafes, and knotted into cobblestone squares or dusty playgrounds. Our first day we enjoyed a late lunch on the terrace of Bar Kasparo, watching the neighborhood life swirl around the swings and a merry-go-round, reminiscent of the teetering iron contraptions of our childhood (back when fun could be a wee bit dangerous). The street signs in the quarter were pretty good, but we did find ourselves circling round a bit, coming back to the same place from a different

direction. We passed a guy several times who would yell, “Irish Pub! Ir-ish Poob! Budweiser, €1.” In the same square were protests against bullfighting.

Our last evening we searched for a while for a recommended candy store, Caelum, which specializes in confections from the convents. We bought some marzipan treats and anise-spiced Alfajores. I went into a shop across the way. After we exchanged Hola and Hi, the lady behind the counter said that her English was not good, but she would try to answer any questions. “My Spanish is not good,” I replied. She gestured into the air and said, “Universal language.” “Yes, “I said, “Shopping,” and we both laughed a good bit at that. So of course I had to buy a cute ring from her, made by an artist named Maria. 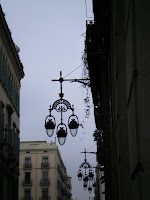 Many buildings in the Gothic Quarter date from medieval times, but Barcelona originated as a 1st Century Roman settlement. Remains of the Romans walls are visible in parts of the city.

Thanks to the Museu d’Història de la Ciutat, we were able to actually walk along some Roman streets, or rather, inches above them, on metal mesh and glass sidewalks. This fascinating exhibit takes you through excavation of Colonia Iulia Augusta Paterna Faventia Barcino, a city founded by Emperor Augustus around 10 BC. We entered the bell tower and saw that the Romans reused cornices and tablets in subsequent construction. We saw the mosaic floor of a impluvium, a shallow pool in the open atrium of the home used to collect rainwater. The gutters for sewage were apparent, as were the casks, pools and channels used in wine and salted fish and garum (fish goo) industries. The city’s laundry facilities supported a complicated cleaning process (slaves were handy for that) that included using urine collected from vats on the street in front of the laundry. The laundry owners paid a tax to the city to collect public pee. The excavation shows the growing role of the Christian church, tracing construction of the Visigoth church to the Episcopal complex of the 7th Century. Exhibits along the way showcase implements of daily living, including 2,000 year old glass vials. We loved this exhibit. It was, as the lads in Barcino surely must have said, way cool.