During the Spauldings’ visit of last weekend we accomplished something denied to us the last time we attempted it: we visited the neolithic monument at Newgrange. 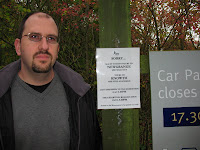 This is what I looked like the first time we attempted this in 2006. We drove around for hours trying to find the place, and when we finally found it we were too late for the tour. We actually cried, we were so tired and disappointed. 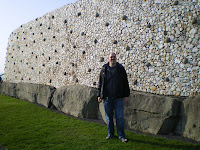 This is what I looked like last weekend. Not only am I smiling, but that is indeed the monument behind me. Newgrange is a passage tomb built over 5000 years ago and predates the Great Pyramid of Giza by 500 years and Stonehenge by 1000 years. It was built in such a way that on the shortest day of the year, the winter’s solstice (and two days before and after), the rising sun would shine through an opening above the entrance and illuminate the inner chamber for only a few moments. The other 360 days of the year the chamber is pitch dark. A lottery is held every year to pick the lucky few who will be allowed into the chamber on the solstice to observe the amazing event. The wall behind me in the picture was painstakingly reconstructed over many years from the stones that had fallen from the sides of the monument. The wall was built up and knocked over repeatedly to determine how the stones would’ve fallen so their original placement could be determined. In other words, this is very nearly how it actually looked 5000 years ago. More information on Newgrange can be found in the Wikipedia. 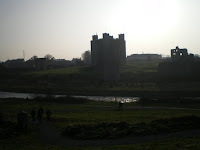 Also last weekend we visited Trim Castle, in Trim, County Meath. Built by Hugh de Lacy and his son Walter and finished in 1206, it is the largest castle in Ireland and the largest Norman castle in Europe. 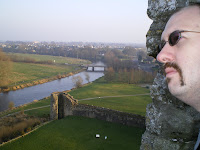 We toured the interior and climbed to the top of the walls of the keep, which afforded a spectacular view of Trim and the countryside. 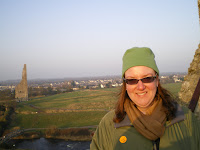 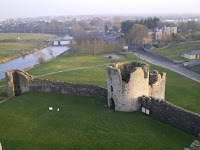 This gatehouse and other parts of the castle were featured in the Mel Gibson epic Braveheart. The river Boyne can be seen in the background. It was a very successful day of touring a very historic part of Ireland.