Weekend in County Wexford Scenes from the Park

More on Our Weekend 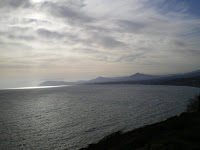 Saturday we took off around 11:00 for our drive to County Wexford. We avoided the M50, driving past the Dublin docks and down through the towns known to me as DART stations: Dun Laoghaire (pronounced Leary in case you’re ever quizzed), Booterstown, Dalkey and Bray. 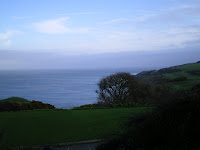 We drove past the campus in Greystones where Bill attended the men’s retreat. We kept on the coast road, though Arklow, stopping for lunch in Wicklow.

Outside Wexford we stopped at the Wexford Wildfowl Reserve. The Reserve, a key winter home for many fowl including up to 10,000 Greenland White-Fronted Geese, is located on a mud flat known as the North Slob, from the Irish word slab, meaning mud (or a soft-fleshed person, the origin of our current use of the word).

We arrived at our destination right before dusk. It’s staying light until 5:30 or so now. Ballinkeele was built in 1840 by the Maher family, farmers and horse breeders. The home is still owned by Mahers and exhibits an amaranthine grandeur. John and Margaret Maher live at Ballinkeele with their three dogs and from February until November host guests in the bedrooms in the main part of the house. The name of the house means “off the narrow;” the property boundary on one side is a small river, or narrow.

After Margaret gave us a tour, we had tea in the main drawing room. As the day faded, John 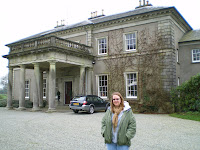 came in and closed the internal shutters on the 12-foot tall windows. We had scheduled dinner at Ballinkeele; Margaret is a Euro-Toque chef. At 7:15 or so we met the other guests in the drawing room for drinks. We were sharing the home with four other guests: Mary and Pauline from Dublin, and Mary’s brother Des and wife Aisling (pronounced Ashling) from Enniscorthy, a town about 20 km up the road. 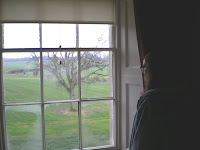 Any food would have tasted delicious under the gleaming crystal chandelier in the beautiful dining room. Even better, our meal was truly marvelous. A starter of eggplant with feta followed by passion fruit sorbet. 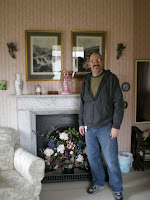 The seemingly simple entrée of impeccably fresh salmon on a bed of spinach with cream sauce, potatoes, leeks and cauliflower worked together perfectly. Dessert was a gorgeous panna cotta with berries. After a cheese plate, we retired to the drawing room for Irish coffee (me) and tea (Bill). We chatted with our companions until midnight, the end of a lovely day.

On Sunday we stopped at the Irish National Heritage Park. The Park provides a trail through Irish history with recreations of dwellings and burial and ceremonial sites from 5,000 years ago until the Viking times. We saw an example of a Rath, or ring fort, that would contain dwellings for an extended family; the livestock would be brought within the fort walls at night. Villages often sprung up around the rath locations because cow paths and other “infrastructure” would be in place. Raheny, the part of Dublin where we live, is derived from Rath Éanna. 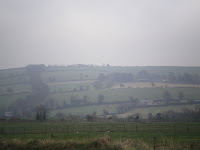 We ate lunch in Enniscorthy, and tried to visit a number of sites that are closed for the winter. We took the N11 which is more direct but has plenty of lovely green hills to admire. We missed a turn in Dublin, and so wandered through City Centre, but we are such pros now that it was no big thing. We arrived back at our Rath around 6:00.