Yesterday Sharon, Bill, Charles and I left Dublin on the train and traveled to the city of Cork southeast of Dublin. We checked into a nice bed and breakfast called Fernroyd. It is located an easy walk from the city center. A main attraction in Cork is the old Cork City Gaol. It is no longer a working jail since the 1920s. The pathway to the prison is almost straight up a steep hill. Some of us wondered if we would make it but we did. The building looks more like a castle than a prison. The prison is now a museum depicting horrors of Victorian imprisonment when women and children as well as men could be sent to jail for as little as stealing bread because they were starving. 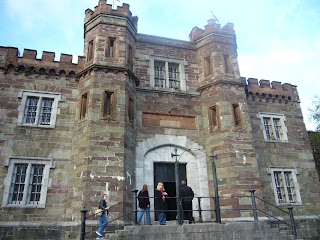 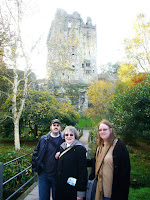 Today we went to the town of Blarney, home to the famous Blarney Castle. More than anything else we have seen, the castle made me realize I am actually in Ireland. The castle ruins are one of Ireland’s most famous landmarks. The Blarney Stone is located on the very top of the castle. The way up is a narrow winding stair (almost a ladder). Once you start up, you have to keep going because you can’t go back down that way. The view from the top is worth the effort. Charles kissed the 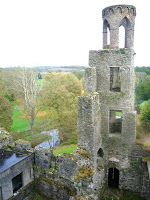 blarney stone which is supposed to bestow the gift of gab. Sharon, Bill and I declined.

The grounds surrounding the castle are beautiful. Not far from the castle is an area of outcroppings of huge rocks. There is a cave which dates back to Druid times. I did think Icaught a glimpse of a little blue person. 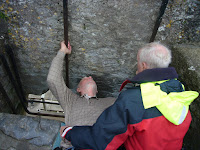 Back in Cork late this afternoon, we went to a pub called Charlie’s where every Sunday afternoon musicians gather to play traditional Irish music. It was really fun to hear them. We recognized the roots of our American southern folk music and blue grass music in the music we heard today. The people in the pub were very friendly and we enjoyed talking with several of them. They thought we had accents! The Irish seem to be fond of Americans. They identify with us because of the fight for independence from the dreaded English. 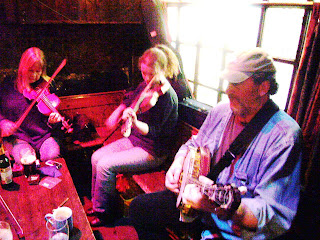 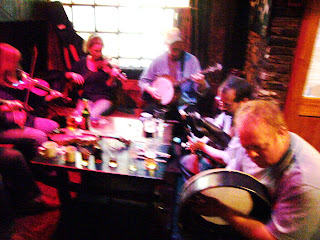 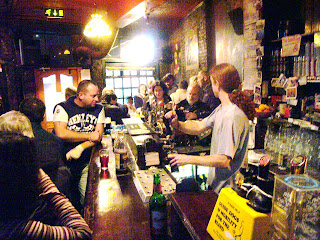