The Week in Review

We’re at the end of our second real-life week in Dublin. Bill’s been working each day and then coming home and making us dinner. You didn’t think I’d be cooking, did you?

Tonight, maybe a trip to the pub?

On Monday, I went into the city to meet with CPL, a recruiting company I’ve been working with. They’re located in Merrion Square, so after my meeting I went to the National Gallery to eat lunch and view the Paintings from Poland exhibit.

I am particularly charmed by museum cafes. You can find one just by listening for the clinking dishes and hum of conversation, and they serve food that embodies the idea of lunch. I had chicken and mushroom soup with a tomato roll. If you’re served a pinkish/orangey bread in Ireland, it’s to-mah-to bread. Quite tasty. I had a book with me, so I read while eating my soup, stopping every so often to butter my bread. It seems wrong not to butter bread here.

I enjoyed the Polish exhibit. You could choose an audio tour in English or Polish. I chose English. The exhibit included the years 1880-1939–Symbolism through Modern Art. I found a Polish culture site referring to the exhibit saying,


The popularity of both Poland and Poles in Ireland is growing so rapidly, that the Irish are more and more interested in presenting Polish culture in their country. By means of the exhibition, they are aiming to attract the Polish audience and, at the same time, to promote Polish culture and provide the Irish with knowledge concerning Poles.

I hope Poles are popular in Ireland! I know many have immigrated in recent years. I was just looking at a grocery advertisement that features items such as Krakus Krakows – Sucha, Piwo Lech puszka, and Pierogi z serem.

I enjoyed the paintings. Some of the early paintings feature sad jesters and courtly elegance. Mythological and fantastic creatures make frequent appearances as well. The effects of cubism are apparent in many of the more recent works.

This was one of my favorites: 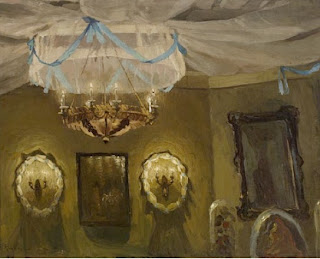 I like how much is depicted by this setting alone. The Mazurka is a traditional Polish dance and the White Mazurka is the last dance of the evening, frequently danced at dawn. So, the title denotes an ending, and the candles and tulle an ephemeral loveliness. This is the painter’s family estate and I think we can share his affection for these traditions and an awareness of their fading relevance. (Or that’s what the catalog says at least!)

The exhibit contained paintings from several father and son painters that spanned the transition from Symbolism to more Modernist ideals. One such pair is Jacek and Rafał Malczewski. These two paintings were displayed side by side. 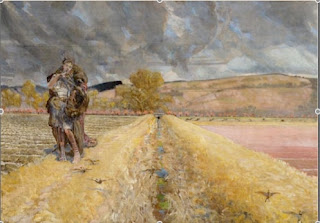 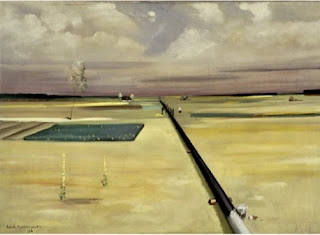 Rafał Malczewski
Pipeline in the Field, 1938

These paintings show obviously shared elements of composition from two interpretations. Jacek sought to convey the spiritual power of resurrection in his paintings–the change of the seasons being a constant reminder of rebirth. The colloquial saying, “St Agnes letting larks out of her purse” heralded the arrival of spring. His son was attracted to the effects of industrialization on his homeland.

Many more beautiful and interesting paintings in this exhibit. If you’re in the area, you should go! By the way, if anyone is watching, these images are for purely personal use!

I rode the train to Pearse Street on my trip to Merrion Square. We passed one scene on the way that I really wanted to photograph, but trying to look cool and non-touristy, I didn’t pull out my camera. It was near the Clontarf Road stop, and looking out to the East I saw an expanse of rooftops, small, crowded hills of grey shingles with groups of short, round chimneys, and beyond, on the horizon, a criss-cross of yellow and orange cranes reaching up into the sky. It depicted the current transformation of Dublin to me. But, as the man across from me said to his companion, “Ah, but they’re all idle. Doesn’t mean a thing if they’re idle.”

The rest of the week I’ve been taking calls from recruiters, wandering the neighborhood and slowly unpacking our last two suitcases.

This Monday is a Bank Holiday, so Bill and I are taking off for parts green. Then my parents arrive on Wednesday and we’ll be hitting the culture hard.